Lessons From Stephen's Speech | The Importance of Melchizedek 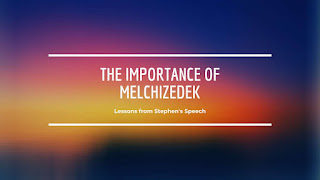 The Importance of Melchizedek

14 When Abram heard that his relative had been taken captive, he called out the 318 trained men born in his household and went in pursuit as far as Dan. 15 During the night, Abram divided his men to attack they and he routed them, pursuing them as far as Hobah, north of Damascus. 16 He recovered all the goods and brought back his relative Lot and his possessions, together with the women and the other people.

17 After Abram returned from defeating Kedorlaomer and the kings allied with him, the king of Sodom came out to meet him in the Valley of Shaveh (that is, the King’s Valley).

18 Then Melchizedek king of Salem brought out bread and wine. He was a priest of God Most High, 19 and he blessed Abram, saying,

“Blessed be Abram by God Most High,

Creator of heaven and earth.

20 And praise be to God Most High,

who delivered your enemies into your hand.”

Then Abram gave him a tenth of everything.

21 The king of Sodom said to Abram, “Give me the people and keep the goods for yourself.”

22 But Abram said to the king of Sodom, “With raised hand I have sworn an oath to the Lord, God Most High, Creator of heaven and earth, 23 that I will accept nothing belonging to you, not even a thread or the strap of a sandal, so that you will never be able to say, ‘I made Abram rich.’ 24 I will accept nothing but what my men have eaten and the share that belongs to the men who went with me—to Aner, Eshkol and Mamre. Let them have their share.”

Gen 14 is a battle of kings where 4 kings attack 5 kings and defeat them. They plunder the captives and leave the place and take Lot along with them.

When Abraham hears of this, he rounds up these men and goes with his allies and recover the bounty and rescue Lot. On his way back, he meets 2 kings.  Abraham gave back everything that he took in captive while dealing with the King of Sodom. But our focus is on verses 18-20.

Q. Who is this Melchizedek?

He appears out of nowhere and then we hear about Him again only after 1000 years. In Psalm 110 there is a mention of His name. “The Lord has sworn and will not change his mind: “You are a priest forever, in the order of Melchizedek.””

After this we don’t hear of Him for another 1000 years. In Hebrews

Abraham defeating the enemies is an act of God. Melchizedek makes mention of that. Melchizedek means King of righteousness and King of Salem. These verses are full of rich symbolism. He brought out bread and wine. He blessed Abraham and he in return tithed to Melchizedek. These verses point to Jesus.

until I make your enemies

a footstool for your feet.””

Hebrews 5:6 mentions Melchizedek and explains it further in Hebrews 7: 1- 4 This Melchizedek was king of Salem and priest of God Most High. He met Abraham returning from the defeat of the kings and blessed him, 2 and Abraham gave him a tenth of everything. First, the name Melchizedek means “king of righteousness”; then also, “king of Salem” means “king of peace.” 3 Without father or mother, without genealogy, without beginning of days or end of life, resembling the Son of God, he remains a priest forever.

Genesis tells us about the beginning of things and it refers to a priest in the form of Melchizedek for the first time. Man needs to make peace with God and throughout the ages people have tried to please God to get this peace. But what they realise is they needed a mediator, who is a priest who would make sacrifices for sin on behalf of people and receive offerings from people on behalf of God.

The bread and wine signify the sacrifice of Jesus, He received tithes and blesses Abraham. Moses and the Levitical priesthood all did the same thing. They offered sacrifices, received offerings from people and prayed and blessed people.

The Levitical priesthood meant that a priest can only be a priest and not a king and kings could not be priests. 2 Chronicles 2: 26 speaks about king Uzaiah who was a good king, but towards the end of his reign, he became proud and entered the temple to burn incense. In verse 19 we see that he was struck with leprosy and for the rest of his life he had to live separated because of his sin. The same thing happened with king Saul. But in this passage we see that Melchizedek who is king as well as a priest.

In Hebrews 7:4 it mentions that Abraham tithed to Melchizedek. Melchizedek was greater than Abraham. The Old testament is a shadow of what was to come. What we have in Hebrews is the details of that shadow.

Heb 9: 11:12 “But when Christ came as high priest of the good things that are now already here,[a] he went through the greater and more perfect tabernacle that is not made with human hands, that is to say, is not a part of this creation. 12 He did not enter by means of the blood of goats and calves; but he entered the Most Holy Place once for all by his own blood, thus obtaining[b] eternal redemption.”

Jesus is a superior priest and king in the order of Melchizedek. Heb 7:25 “Therefore he is able to save completely[c] those who come to God through him, because he always lives to intercede for them.” Right now in heaven, he is praying for us.

Jude 1:24 – 25 “To him who is able to keep you from stumbling and to present you before his glorious presence without fault and with great joy— 25 to the only God our Savior be glory, majesty, power and authority, through Jesus Christ our Lord, before all ages, now and forevermore! Amen.”

We have confidence that we will end this race well because Jesus himself is praying for us and can keep us from stumbling. Abraham’s response was to give Melchizedek 10th of everything.

Q. What is our response?

The real recipient of our giving is our Lord Jesus. So our response is to gladly and willingly give our tithes.

These are the most quoted old testament verses in the new testament.

Q. What should we give?

It is a progressive revelation – Cain and Abel, Abel just knew that he had to give something. Abraham had a revelation of 10%. Jacob gave a 10th of all that God gives him. Jacob became very wealthy! They gave their tithes even before the law came. Then the law came and solidified that we had to give a tenth.

Lev 27:30 says the tithe of the land has to be given to God. Malachi 3: 8- will a man rob God, yet you robbed me. And God said they robbed Him in tithes and offerings. The minimum acceptable giving is 10% and when we don’t do that we are robbing Him. Then God makes this promise and asks us to test Him in this. This is the standard God established in the Old Testament.

When we are faithful in our giving God will bless us. Tithing was before the law.

Matt 5:27 ““You have heard that it was said, ‘You shall not commit adultery.’[e] 28 But I tell you that anyone who looks at a woman lustfully has already committed adultery with her in his heart.” This is the example of raising the bar in the New Testament standard. People in the new testament gave beyond 10% because even in giving, the bar has been raised.

Q. How should we give?

4.     With faith – we need to believe that God will bless us abundantly.

Word of Grace is an Evangelical (Born Again),  Spirit-filled (Charismatic), Reformed, English speaking church in Pune that upholds the Bible as God's inspired Word for life. We are a church community that has people from every part of India and parts of the world. We are here to put the Great Command and the Great Commission into practice by equipping and releasing every member into works of service.  Word of Grace is a part of a wider international family of Churches called RegionsBeyond.To know more about us please log onto www.wordofgracechurch.org.
By Navaz DCruz - September 24, 2020