Forgotten By Man, Favoured By God | The Story of Joseph 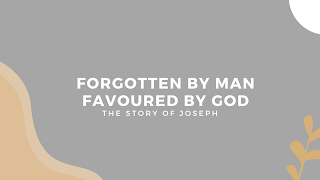 This message was preached by Lasya D via zoom  Word of Grace Church, on Oct 25th 2020. For the audio please click here..

Forgotten by man, favoured by God – the story of Joseph from prison to palace

The Bible is a rich theological treatise, it is the most eloquent piece of literature, it is the inspired word of God, it is a spiritual book that changes lives – it has certainly changed mine. But primarily, it is a true story of a loving God who was separated from those he created and set into motion a plan for the redemption of all mankind. And we see this grand plan of redemption knit into every single fibre of this book.

He chose a man Abraham to bless so that he could be a blessing – he became a friend and a father and then chose a nation to redeem and call it his own until his ultimate plan of redemption in the form of His son Jesus could be revealed. And in today’s story of Joseph, we’ll see the same God advancing his purposes of redemption.

Summary of the passage: We pick up the story when Joseph is falsely accused by Potiphar’s wife and unjustly punished and put in prison. But even in the prison, God is with him and continues to show him favour. He rises in the ranks and is made in charge of the whole prison. He then listens to the dreams of 2 prisoners – the cupbearer and the baker and interprets them correctly. He asks for the cupbearer to put in a good word for him in the palace, but the cupbearer forgets. But God gives pharaoh a dream and joseph is called in to interpret it. Joseph not only interprets the dreams correctly but gives wisdom on what to do with it. He finds favour in pharaoh’s eyes as well and is put in charge of the whole kingdom of Egypt. But we see a bigger purpose in this that during the years of famine, but for the position of Joseph, the nation of Israel would have been wiped out.

I want to examine this passage under 3 distinct points: favour, dreams and promotion

The favour of God flows from the fellowship with God. We cannot circumvent it.

It is the same favour that God gave Abraham – a blessing to be a blessing. Favour has to overflow in the form of blessing to others.

"The less I spent on myself and the more I gave to others, the fuller of happiness and blessing did my soul become." ~ Hudson Taylor

Did you know that the evidence of God’s blessing on your life is how you bless others? This may not be monetary – but do people entrust you with things without having to check on you, do you lift up the spirit of those who are despondent with your presence and your gifting? Do you make light the burdens of those around you? (example of my director)

Gen 40 : 6- 8 “When Joseph came to them in the morning, he saw that they were troubled. 7 So he asked Pharaoh's officers who were with him in custody in his master's house, “Why are your faces downcast today?” 8 They said to him, “We have had dreams, and there is no one to interpret them.” And Joseph said to them, “Do not interpretations belong to God? Please tell them to me”

Gen 41: 15-16 And Pharaoh said to Joseph, “I have had a dream, and there is no one who can interpret it. I have heard it said of you that when you hear a dream you can interpret it.” 16 Joseph answered Pharaoh, “It is not in me; God will give Pharaoh a favourable answer.

They knew it was a spiritual dream but they did not know how to receive it because they did not know how to interpret it. This is not a dream in the sense of hopes and dreams – it is important to realise God will fulfil his promises and we cannot hold him accountable to the expectations we have of our own life. We need to realise as it says in 1 Corinthians 6:19 -20 “You are not your own, 20 for you were bought with a price. So glorify God in your body”. Joseph did not ask for the dreams he got from God – he was immature in handling them, but was not power hungry and seeking out significance.

With respect to this whole subject of dreams – they are like tongues, in that without an interpretation we don’t know what to think about them. 1 cor 14:13-14 Therefore, one who speaks in a tongue should pray that he may interpret. 14 For if I pray in a tongue, my spirit prays but my mind is unfruitful. He goes on to say in verse 28 But if there is no one to interpret, let each of them keep silent in church and speak to himself and to God.

SO what will you do the next time you have a dream. I mostly write it down and forget about it. Or worse google the spiritual meaning of it. But can I encourage you and say, google is not a spiritual tool, prayer is. Pray that you might have the interpretation of dreams, search it out.

But you’d think after this generous blessing that the cupbearer will remember what Joseph has done.

Do you ever forget important things? And how many would say that it was something that did not personally affect you?

It is our nature to forget because we have a limited and selfish mind. That is why Jesus commands us in 1 Corinthians 11:25 “This cup is the new covenant in my blood. Do this, as often as you drink it, in remembrance of me

Remember that promotion is from the Lord. Favour is different from promotion. Joseph had favour in the prison and everything under it, but to move from the prison to the palace, you need a promotion. You can maintain favour through faithfulness.

But promotion comes from the Lord. I’ve heard it being said that your gift makes a place for you before kings. But can I just say, that it is God who gives sleepless nights to kings and dreams that trouble them so that your gifts are needed by him?

If your gift was sufficient to promote you, then the most powerful people in the world would be most gifted. But we see that’s not the case. All Promotion comes from the Lord. And it matters how you handle it.

Joseph came in the posture of a servant, to serve Potiphar, to serve the keeper of the prison and to serve the Pharaoh. We cannot come before people arrogantly because they need your gift. Remember that God is the one who makes space for our gift and he is the one who exalts us in due time.

If you are looking for promotion, serve the vision of the leaders above you. Serve them with humility and they will take note that God is with you. You may have a different point of view – Joseph had a very unique perspective but he used it to serve the vision of the king – to bring increase to his kingdom and not to create a separate kingdom of his own. God honours humility with exaltation Phil 2:9-11 Therefore God exalted him to the highest place and gave him the name that is above every name,  that at the name of Jesus every knee should bow, in heaven and on earth and under the earth, and every tongue acknowledge that Jesus Christ is Lord, to the glory of God the Father.

How is Joseph a foreshadow of Jesus:

Jesus came down just like Joseph from His Father’s house in the form of a lowly servant.

He was distinguished because God was with him in Matthew 7:29 “the crowds were astonished at His teaching because he taught as one who had authority, and not as their teachers of the law.” And that authority comes from God.

Both were favoured by God and by men. Luke 2:52 “And Jesus increased in wisdom and in stature and in favor with God and man.”

Both of them were falsely accused and unjustly punished. He was then sent to the lowest places only to be raised again in 3 days. Acts 2:24 “But God raised him from the dead, freeing him from the agony of death because it was impossible for death to keep its hold on him”

Just as Joseph had made a way for Israel to be redeemed from the effects of the famine and death, Jesus became the way for salvation from sin for all those who believe.

Both of them were raised up in glory.

Gen 41: 42-43 Then Pharaoh took his signet ring from his hand and put it on Joseph's hand, and clothed him in garments of fine linen and put a gold chain about his neck. 43 And he made him ride in his second chariot. And they called out before him, “Bow the knee!” Thus he set him over all the land of Egypt. In this, the signet ring represents the Authority of Pharaoh, the Garments represent his purity and the gold represents his royalty. And Pharaoh called Joseph's name Zaphenath-paneah which theologians say either translate as the one to whom mysteries are revealed, or get this… the living one.

Revelation1 12-18 and among the lampstands was someone like a son of man,[d] dressed in a robe reaching down to his feet and with a golden sash around his chest. 14 The hair on his head was white like wool, as white as snow and his eyes were like blazing fire. 15 His feet were like bronze glowing in a furnace, and his voice was like the sound of rushing waters. 16 In his right hand he held seven stars, and coming out of his mouth was a sharp, double-edged sword. His face was like the sun shining in all its brilliance.

17 When I saw him, I fell at his feet as though dead. Then he placed his right hand on me and said: “Do not be afraid. I am the First and the Last. 18 I am the Living One; I was dead, and now look, I am alive forever and ever! And I hold the keys of death and Hades.

Jesus is the redemption plan of the Father dreamed up in the heart of God before the foundations of the world, so that in Him we might have perfect union with God again.