The Promise, The Prison, The Palace 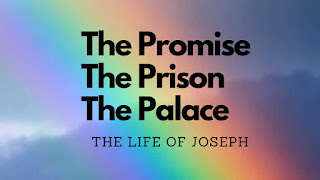 This message was preached by Colin D via zoom  Word of Grace Church, on Oct  18th 2020. For the audio please click here.. For the worship please Click here

Romans 8: 28 – “And we know that for those who love God all things work together for good for those who are called according to his purpose.”

It is an amazing truth! How is God working for our good during bad things? How does He work disappointment and distress for our good and for His glory? Let’s look at it in the life of Joseph.

Jacob leaves Canaan with nothing, but he returns with a lot of things. Jacob is a transformed man and God changed his name to Israel. The hostility between the brothers also ends.

These are the generations of Jacob. Joseph, being seventeen years old, was pasturing the flock with his brothers. He was a boy with the sons of Bilhah and Zilpah, his father's wives. And Joseph brought a bad report of them to their father. 3 Now Israel loved Joseph more than any other of his sons, because he was the son of his old age. And he made him a robe of many colors. 4 But when his brothers saw that their father loved him more than all his brothers, they hated him and could not speak peacefully to him.

We see that Joseph is born into a dysfunctional family. His father loved and favoured one child over the rest. The difference in his treatment of Joseph is obvious and so the brothers did not like him. Then we see the prophetic in his life.

5 Now Joseph had a dream, and when he told it to his brothers they hated him even more. 6 He said to them, “Hear this dream that I have dreamed: 7 Behold, we were binding sheaves in the field, and behold, my sheaf arose and stood upright. And behold, your sheaves gathered around it and bowed down to my sheaf.” 8 His brothers said to him, “Are you indeed to reign over us? Or are you indeed to rule over us?” So they hated him even more for his dreams and for his words.

Then he had another dream

How can we see Jesus in here? Joseph was a shepherd loved by his father just like Jesus. Jesus was also hated by his brothers. Joseph spoke his future sovereignty, his robe was stripped out, was sold into slavery, etc and we see many parallels to the life of Jesus.

Sometimes it is our family and the people closest to us who will misunderstand us. Why did these bad things happen to joseph? Was God with him? Even in the midst of the difficult situations we are going through, we know he is working out everything for our God.

Joseph is faithful and remains faithful in the coming chapters as well.

Now Joseph had been brought down to Egypt, and Potiphar, an officer of Pharaoh, the captain of the guard, an Egyptian, had bought him from the Ishmaelites who had brought him down there. 2 The Lord was with Joseph, and he became a successful man, and he was in the house of his Egyptian master.

Even in the darkest of situations, God did not let go of Joseph. The plans he has are to prosper you and not to harm you. Joseph was faithful to his father, and was faithful to Potiphar. He entrusted more to Joseph as he saw his faithfulness and that God was with him.

Joseph’s presence in that house brought favour to the entire house as well as the fields. When we are faithful with what God gives us, he will bring blessing for our sake to the companies and colleges and institutions we work at.

Joseph was tempted in this situation with Potiphar’s wife. What is his response?

Verse 8-9 “Behold, because of me my master has no concern about anything in the house, and he has put everything that he has in my charge. 9 He is not greater in this house than I am, nor has he kept back anything from me except you, because you are his wife. How then can I do this great wickedness and sin against God?”

Then a second time Joseph loses his cloak and it put him once again into a pit – verse 19-20 “19 As soon as his master heard the words that his wife spoke to him, “This is the way your servant treated me,” his anger was kindled. 20 And Joseph's master took him and put him into the prison, the place where the king's prisoners were confined, and he was there in prison.” Now he is not just a slave but a slave prisoner.

If there was a time for disappointment, this would have been it. But God is with him even in there as it says in verse 21“But the Lord was with Joseph and showed him steadfast love and gave him favor in the sight of the keeper of the prison.”

No matter what you are going through, God is with you. Be faithful in what He has called you to do? Joseph became a servant, became a blessing, he resisted the temptation, was falsely accused, attempted no defence, was cast into prison even though he was innocent – there are a few things that mirror the life of Jesus as well.

God gave Joseph success in whatever he did.

2 notable prisoners – the baker and cupbearer were also in the same prison. Both of them had dreams and Joseph takes note of the faces of the people. Both of them share their dreams and he interprets them with the help of God and then he says “Only remember me, when it is well with you, and please do me the kindness to mention me to Pharaoh, and so get me out of this house.” But when the cupbearer was released “Yet the chief cupbearer did not remember Joseph, but forgot him.” For another 2 years, Joseph was in the prison. But God is sovereignly at work in all the details of our life.

God raises us, Joseph, later on and the Pharaoh puts Joseph in charge. In Gen 41:42 “Then Pharaoh took his signet ring from his hand and put it on Joseph's hand, and clothed him in garments of fine linen and put a gold chain about his neck.” This is the third time we see that Joseph received

Joseph was numbered with the transgressors – Jesus was crucified on the cross with the criminals. Joseph pronounced judgement on one of the prisoners and blessing on the other – Jesus did the same on the cross. Joseph was stuck in the prison for another 2 years and Jesus also was sent to the grave before God raised him up.

We can be disappointed and dejected in life, but what is important is how we behave. When we are forgotten will we continue to remember God, knowing he has our lives in His hands. God’s purposes are greater than we can imagine. God used Joseph’s life to protect and preserve the lives of His people.