God's Plan, The Pot, The Plot and God's Prevailing Plan 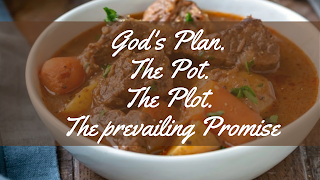 This message was preached by Navaz D via zoom  Word of Grace Church, on Oct  11th 2020. For the audio please click here.

GOD’S PLAN, THE POT, THE PLOT, THE PREVAILING PROMISE OF GOD

We are in a series going through major events in the Old Testament. We saw how God made big promises to Abraham, that his descendants would be more than the sands on the shore and stars in the sky. God did it in His time. Isaac was born. A son of promise.

Now the son of promise, Isaac has no heirs. He prays to God and God hears his prayer 20 years after marriage(Gen25:26). He saw God as one who answers prayer in His time. God’s plan was on course.

However there are not only two babies in Rebecca’s womb, but they are two boys from whom two nations will also be birthed. (Gen25:23)

The two boys were born and were very opposite not only in looks but in personality as well. One was red and hairy and a man of the wild. He loved to hunt, he was hot-headed and impulsive. The other was smooth-skinned and more domestic who preferred to the indoors and cook. He was cool but calculative and cunning.

Even before their birth, their destiny was marked out for them. The older would serve the younger (Gen25:23). God had a plan and a purpose. It was his sovereign will (Rom 9:11)

In the same way, God has a plan for your life.

Today because we are Christ-followers, we have come into Abraham’s blessings.

Also, I am sure Rebecca had shared this with Isaac and the boys and they must have grown up with this knowledge.

This is an oral culture that passed down family genealogy, history and stories from father to son.

The boys are now young men. One day Esau goes out hunting but comes back with no game and is famished. His brother happens to have just cooked some delicious stew. (Gen25:29). He asks his brother to share his stew.

He asked for his brother’s birthright. At a human level look at this ask! Was it an equal exchange? Stew for in exchange for a Title deed and inheritance?  Shocking, right?

This is exactly what happened. Esau exaggerated his need. Could he not have gone into the family kitchen and got something to eat?

He was driven by his senses that needed to be satisfied in that instant.

Esau did not have a long-term look on life. He did not see that he too was Abraham’s descendant and in that, he too would be blessed.  Was serving his brother was such a bad thing?

He gave into the old lie of it will not be enough, and that one had to be in competition with your brother and be at the top. He did not think of the repercussion of his decision on future generations.

Esau too was a child of Abraham. We are all in Christ but we can live as carnal Christians. We can live for the moment, with no thought to our eternal destiny nor to the generations that follow us.

Our choices have consequences, as we will see. A momentary pleasure can cause us to lose something of eternal value. Passing pleasures can lead to perilous pain. We get to choose our sin but not the consequences.

Do not invoke grace because the right application of Grace is that grace would have empowered you to do the right thing. Grace is not a license to sin; rather, grace keeps you from sin.

We see the same mistake of Abraham repeated here. One would have thought that they would have learned that God has his way to make it happen and He does it in his time.  Jacob felt he had to grab it rather than waiting for God to give it to him and did not wait for God’s timing to work things out.

Some of us can feel were not the scales tipped in Jacobs favour from the start. Yes, God chose Jacob over Esau.

A woman once said to Mr. Spurgeon, ‘I cannot understand why God should say that He hated Esau.’ ‘That,’ Spurgeon replied, ‘is not my difficulty, madam. My trouble is to understand how God could love Jacob.’”

Now Isaac is old and his eyes have grown weak. He was about 137 years old. He thought he was going to die but he did not. He lived another 43 years and died at the age of 180 years. (

He asks Esau to make him some food so he could eat and then confer on him his blessing.

Let us stop and think about this. What is strange about this verse? Isaac knew of God’s prophecy over Jacob but insists on blessing Esau !!! How strange is that? Why was he trying to subvert God’s plan?  Surely, he also saw the consequences of taking matters into one’s own hands and how that turned out for his dad!

Rebecca hears Isaac talking to Esau and decides to thicken the plot. She plots on how this plant should be prevented.

She like her mother-in-law tries to help God bring the prophecy to pass.

She schemes with Jacob to trick the father. Jacob, who snatched once, was ready to take it all – lock stock and barrel.

(v18- v17 )He cooks a meal, wears his brother’s clothes to smell like him, and puts goat’s skin on his hands to feel like his brother.

Jacob doubts and asks several times, “is it you my son Esau?” The tragedy in this is all four of them did not trust God, nor was there trust between each other.

It is only later when Esau comes in that Jacob realizes that he was truly deceived. The Bible tells us he trembled (27:33). It does not mention why he trembled. I suggest two reasons for you.

He may have realized he should have followed through with his doubt and called Rebecca in on this. It could be the fear of God fell upon him because he well knew that this was God’s intent all along and he was trying to prevent it from happening.

He recognizes and resigns himself to God’s plan when he says to Esau “And indeed he shall be blessed.” V33. And Hebrews records it as faith !! Heb. 11:20 by faith Isaac blessed Jacob and Esau concerning things to come. What amazing grace!!

We see Rachel continuing to scheme. She knows that Jacob is no longer safe around his brother’s murderous rage. She uses a ruse of wanting to find a wife for Jacob among ‘their own people’, to send him off to her brother Laban.

We know how that turns out for Jacob. He met his match in his father-in-law.

In spite of his scheming God does not go back on his promise. He speaks to Jacob in a dream and reminds him of the unconditional covenant.

I am with you

I will watch over you

I will bring you back

I will not leave you until I have done what I have promised. (Gen28:15)

Jacob unfortunately still has trust issues. And he wakes up and makes a conditional promise to God

If God will be with me…

Then God will be my God

You see the grace of God here. God still chooses to be known as the God of Abraham Isaac and Jacob – all 3 deceivers. His call on our lives is a covenant call, no matter how much we mess up. The promise will not be revoked.

If you have messed up and tried things in your own strength, look at these three and take heart. Come to God who is ever willing to forgive and put us back on track. Jacob could not rely on heritage but he had to forge his own history with God.

My story – how I have had to wait for promises of God with regard to songwriting etc. God made it happen and is still making it happen in His time.

So we see that all four messed up but God’s purpose prevailed but not without consequences.

Thank God, we have one greater than Isaac and Jacob.

Praise God, Jesus overcame and we can overcome by the blood of the lamb.

In addition, Jacob made a feeble attempt to cover himself in the robes given to a first-born. We today are covered or clothed in Jesus’ robes of righteousness, which qualifies us to receive an inheritance that will ever spoil not fade. Amen.

Word of Grace is an Evangelical (Born Again),  Spirit-filled (Charismatic), Reformed, English speaking church in Pune that upholds the Bible as God's inspired Word for life. We are a church community that has people from every part of India and parts of the world. We are here to put the Great Command and the Great Commission into practice by equipping and releasing every member into works of service.  Word of Grace is a part of a wider international family of Churches called RegionsBeyond.To know more about us please log onto www.wordofgracechurch.org.
By Navaz DCruz - October 12, 2020