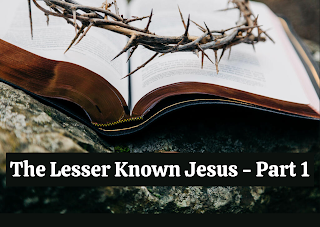 Jesus is famous. In all history, philosophy, religion etc., he is well known. But do you feel sometimes that we are all too familiar with him the way we might be familiar with a movie star? We are entering the season of advent when we sing songs that are familiar, cook food that is reminiscent of our childhood and recreate memories that are nostalgic. In all that family magic, we can think of Jesus as just another decoration, an adornment. He is well-known but the question is how well we know him.

We generally do this during worship, but let me ask you - who is Jesus to you?

We are beginning a new series in this advent season to get to know the nature of Jesus better. We will be picking up on the names and traits of Jesus that are not as well-known or discussed. The series will be called “the lesser known Jesus” and today we will look at getting to know Jesus the High Priest, the Mediator and the Advocate.

All three of these characteristics are Jesus as an intermediary between God and Man.

Heb starts with talking about an ever greater king, the supremacy of Christ but then it goes into this hierarchical structure between humans and angels and God. Then it talks about how Jesus broke that hierarchy and came down to earth and explains why…

Heb 2:9-11; 17 - 18 “But we see him who for a little while was made lower than the angels, namely Jesus, crowned with glory and honor because of the suffering of death, so that by the grace of God he might taste death for everyone. For it was fitting that he, for whom and by whom all things exist, in bringing many sons to glory, should make the founder of their salvation perfect through suffering.….17 Therefore he had to be made like his brothers in every respect, so that he might become a merciful and faithful high priest in the service of God, to make propitiation for the sins of the people. For because he himself has suffered when tempted, he is able to help those who are being tempted.” The miracle of Christmas is not the baby being born in a manger, but that the king of heaven, set aside his divinity to descend and become a merciful and faithful high priest.

The word propitiation is very important - it means to appease/ satisfy the wrath of God. Another word for it is conciliation which is where we get the word to reconcile from. Propitiation does not procure his love or make him loving, it only renders it consistent (with his character) for him to exercise his love towards sinners. Because the wrath of God was satisfied on the cross, he is able to turn towards us in love and mercy.

Q. How was Jesus different from the High Priests who came before him?

Q. So how does this role of Jesus as our high priest affect us?

Heb 4: 14-16 “14 Since then we have a great high priest who has passed through the heavens, Jesus, the Son of God, let us hold fast our confession. 15 For we do not have a high priest who is unable to sympathize with our weaknesses, but one who in every respect has been tempted as we are, yet without sin. 16 Let us then with confidence draw near to the throne of grace, that we may receive mercy and find grace to help in time of need.”

There are 3 places in the NT that refer to Jesus as the Mediator. 1 Tim 2:5 “ For there is one God, and there is one mediator between God and men, the man Christ Jesus,”

The High Priest makes a way for us to enter, but the Mediator makes a place for us at the table.

Q. Why is Jesus the mediator?

Hebrews 9: 11-12; 15 - “11 But when Christ appeared as a high priest of the good things that have come, then through the greater and more perfect tent (not made with hands, that is, not of this creation) 12 he entered once for all into the holy places, not by means of the blood of goats and calves but by means of his own blood, thus securing an eternal redemption…. 15 Therefore he is the mediator of a new covenant, so that those who are called may receive the promised eternal inheritance since a death has occurred that redeems them from the transgressions committed under the first covenant”

So what does the mediator do? He makes sure that you receive the covenant promises. This is different from every other world religion because the mediator (a guru, sadhu, whoever) will make sure that they take from you what you need to give away. But Jesus the mediator is giving us what is due to us in the covenant - forgiveness, grace, mercy, blessing, and the power of the holy spirit… that’s what his death achieved for us. That is why in 1 Tim Paul says, there is only one mediator. Nothing else stands between us - no religious leader, no saint, no pilgrimage/ building. There is no other way to God except through Jesus. Jesus is the perfect mediator - the perfect elder brother who gave up all his rights so that could have all of his blessings.

1 John 2:1 “My little children, I am writing these things to you so that you may not sin. But if anyone does sin, we have an advocate with the father, Jesus Christ the Righteous”

There are 2 reasons why we need an advocate:

Rev 12:10 “And I heard a loud voice in heaven, saying, “Now the salvation and the power and the kingdom of our God and the authority of his Christ have come, for the accuser of our brothers has been thrown down, who accuses them day and night before our God.”

His destiny is to be thrown down, but until the fullness of time, he stands before the throne of God accusing us.

Advocacy in the Jewish court - not adversarial but inquisitorial. There is no lawyer standing between the accused and the judge. The Judge himself helps the one standing before him if he sees that he is unable to defend himself.

Romans 8: 33- 34 “33 Who shall bring any charge against God's elect? It is God who justifies. Who is to condemn? Christ Jesus is the one who died—more than that, who was raised—who is at the right hand of God, who indeed is interceding for us.”

So when we sin and come before God the Judge, even if we are not aware of our covenantal promises and blessings, Jesus the advocate steps in and pleads our case. Jesus is our compassionate advocate, who is also the judge.

Q. Does that mean we go on sinning? (Romans 6) No. Remember Jesus is a compassionate advocate but he never condones sin.

John 8: 3-11 “3 The scribes and the Pharisees brought a woman who had been caught in adultery, and placing her in the midst 4 they said to him, “Teacher, this woman has been caught in the act of adultery. 5 Now in the Law, Moses commanded us to stone such women. So what do you say?” 6 This they said to test him, that they might have some charge to bring against him. Jesus bent down and wrote with his finger on the ground. 7 And as they continued to ask him, he stood up and said to them, “Let him who is without sin among you be the first to throw a stone at her.” 8 And once more he bent down and wrote on the ground. 9 But when they heard it, they went away one by one, beginning with the older ones, and Jesus was left alone with the woman standing before him. 10 Jesus stood up and said to her, “Woman, where are they? Has no one condemned you?” 11 She said, “No one, Lord.” And Jesus said, “Neither do I condemn you; go, and from now on sin no more.”” We can no longer go on sinning because it’s no longer our nature once we’ve encountered Christ.

How shall we respond to the High Priest who makes way for us, the mediator who makes a place for us at the table and the advocate who makes a case in our defence?

“22 Let us draw near with a true heart in full assurance of faith, with our hearts sprinkled clean from an evil conscience and our bodies washed with pure water.

23 Let us hold fast the confession of our hope without wavering, for he who promised is faithful.

24 And let us consider how to stir up one another to love and good works, 25 not neglecting to meet together, as is the habit of some, but encouraging one another, and all the more as you see the Day drawing near.”

The passage ends by saying “But we are not of those who shrink back and are destroyed, but of those who have faith and preserve their souls.”