What do you have in your hand? Steve Oliver | Fusion 2016 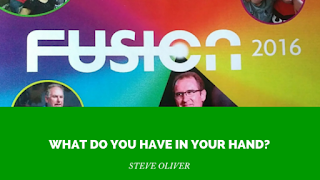 This message was preached by STEVE OLIVER at the Fusion 2016 RegionsBeyond gathering in the UK.
For the audio /video link please click here

Matt 25:14-30
The parable of the talents. We heard Iona's story of God given opportunities to work with world movers and shakers, to work against slavery which is affecting 35 million people.

This is a sobering parable.When you think of all that God is placing in our hands, you begin to feel the weight of what God is doing. God calls out individuals to change a nation viz. Mandela, Gandhi, Churchill. And he calls YOU!

Then he calls a people group just like us and gives us a part in this great story. so we joins the ranks of Hudson Taylor and the great cloud of witnesses. When you speak to the Donna's, Brother Andrew, you do not hear any regret in their voice.

We are gathered here because God has called us to a task. Everyone of us is hand-picked and selected for this task.
What will we be remembered for? This helps us guard our heart.

When you hear Lincoln's story and his humility you see how he knew he needed others but he achieved the emancipation of the slaves.General B McClellan in 1861 was the youngest officer in the American army. He was only 16 with a great leadership gift. He was nicknamed Napoleon. 168,000 men were prepared under his leadership. Lincoln made him general and Chief of the entire Northern army.

However another battalion in the north were completely defeated because McCellan did not come to his aid. He had a problem. He did not like to fight.
I see the church of our age : 2000, 4000, 10,000 and you hear a leaders falling by the wayside. Generals are meant to fight. We have to step up and fight.

"The context of the Christian life is that of warfare" Simon Petit.
Church planting is the call upon us. We have so much today.Today we are so well trained, better buildings, better heating, better sound etc etc. Its OK except is we forget to fight.

Its good to build good local churches but we are under orders to go disciple the nations.
When you see someone rising in the ranks, train them for what God has got for them.

J. D Greer  wrote a book Make Disciples
Lincoln took away Gen B McClellan's commission because he would not fight.

If there is one thing I hope for Regions Beyond is that everyone is discipled by someone.

It would be frightening that we would become a McClellan church.
We are not a church planting movement, but a disciple making movement that will plant churches that make disciples.

What has God put in your hands?

Then came U.S Grant and he led the men into battle and the rest is history.
We all know the parable of the talents and heard it explained in many ways.
Its not about gifts and abilities but about God given opportunities . God puts us in those places. We all want to hear good and faithful servant.
We need to understand that:


Entrusted implies handing over. What is given to us is valuable and costly.
If you look at each servant, he was given opportunity. WE have to be faithful and we can make it prosper under our care.
We have to work hard to make it prosper.We need to go from here and do something. What has been given to us is meant to multiply.
The next time  we gather for Fusion we should see churches planted and leaders raised up. We are here to change the world.

WHAT WILL IT TAKE?


“It may be hard for an egg to turn into a bird: it would be a jolly sight harder for a bird to learn to fly while remaining an egg. We are like eggs at present. And you cannot go on indefinitely being just an ordinary, decent egg. We must be hatched or go bad.” C.S. Lewis.

"Its time to step out and risk" Steadman.